← George Washington Groundhog: One Of The Original WWII Code Talkers (Inventors Of Native Coding) ; Grandfather Of Lisa Christiansen
Constitution of the Cherokee Nation →

1959: Buddy Holly killed in air crash
February 3 1959 is also infamously known as the day that music died. That fatal day Buddy Holly flew to his death while on tour with the Winter Dance Party, a package that included Dion and the Bellmonts as well. It was the first time Buddy Holly had flown. With Holly, R&R also lost famous DJ the Big Bopper and Richie Valens in a bizar twist of events. Eventually it were Tommy Allsup and Waylon Jennings who were going to board that plane. Jennings gave up his spot to the Big Bopper when he came down with the flu, in exchange for a sleeping bag. Allsup accepted a bet from Richie Valens and lost his seat in a coin toss. Valens even joked how it was the first time he had ever won anything. Years down the line Don McLean would give that date the name it had since when he looked back in the lyrics of his 1971 monster hit, singing “I can’t remembered if I cried, when I read about his widowed bride. But something touched me deep inside, the day that music died.

Three young rock ‘n’ roll stars have been killed in a plane crash in the United States.
Buddy Holly, 22, Jiles P Richardson – known as the Big Bopper – 28, and Ritchie Valens, 17, died in a crash shortly after take-off from Clear Lake, Iowa at 0100 local time. 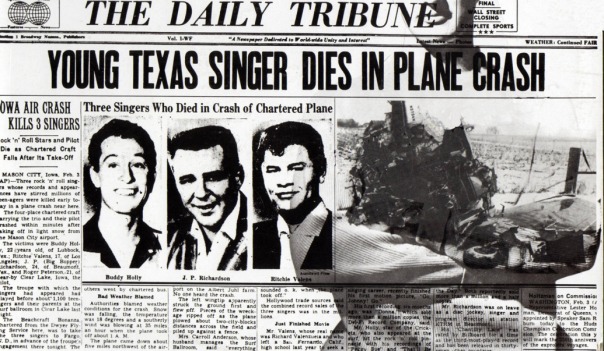 When the show ended, Carroll Anderson drove Holly, Valens, and Richardson to the airport. The plane departed from the ramp and taxied to then-Runway 17 at around 12:55 a.m. Central Time on Tuesday, February 3. The weather report indicated light snow with a ceiling of 3,000 feet (910 m) MSL and winds from 20 to 30 mph (32 to 48 km/h). Though there were indications of deteriorating weather along the route, the weather briefings Peterson received failed to relay the information. The Civil Aeronautics Board (CAB) investigated the crash. The results of the CAB investigation suggest that, soon after takeoff, Peterson became disoriented due to the unfamiliar way the aircraft’s attitude indicator depicted pitch, combined with an inability to find a point of visual reference on a starless night with no visible lights on the ground and the inability to detect the horizon. He lost control of the plane, and the aircraft cartwheeled across a cornfield belonging to Albert Juhl.

The pilot of the single-engined Beechcraft Bonanza plane was also killed.

Early reports from the scene suggest the aircraft spun out of control during a light snowstorm.

Only the pilot’s body was found inside the wreckage as the performers were thrown clear on impact.

Holly hired the plane after heating problems developed on his tourbus.

All three were travelling to Moorhead, Minnesota, the next venue in their Winter Dance Party Tour

Holly had set up the gruelling schedule of concerts – covering 24 cities in three weeks – to make money after the break-up of his band, The Crickets, last year.

Born Charles Hardin Holley – changed to Holly after a misspelling on a contract – he had several hit records, including a number one, in the US and UK with That’ll be the Day in 1957.

After terminating his partnership with the Crickets, Holly assembled a new band consisting of Waylon Jennings, Tommy Allsup, and Carl Bunch, to play on the ‘”Winter Dance Party” tour. The tour also featured rising artists Ritchie Valens and the Big Bopper, who were promoting their own recordings as well. The tour was to cover 24 Midwestern cities in three weeks.

A singer and guitarist, he was inspired by Elvis Presley after seeing him at an early concert in his home town of Lubbock, Texas.

With Presley serving in the Army, some critics expected Holly to take over his crown.

Richard Valenzuela was the first Mexican American to break into mainstream music, after being discovered by record producer Bob Keane, who changed his name to Ritchie Valens.

He had made three albums and achieved a number two chart position in the US with his composition Donna – about his girlfriend – in 1958.

His rock ‘n’ roll re-working of the traditional Mexican song La Bamba – on the B-side of Donna – has also received acclaim.

The Big Bopper had been a record-breaking radio DJ – with a 122-hour marathon stint – and reached number six in the American charts with his record Chantilly Lace.

The distance between venues and the conditions prevalent aboard the poorly equipped tour buses adversely affected the performers. Cases of flu spread among the band members, and Bunch was hospitalized due to frostbite. Frustrated by the conditions, Holly decided to charter a plane when they stopped for their performance in the Surf Ballroom in Clear Lake, Iowa, to reach their next venue in Moorhead, Minnesota. Carroll Anderson, owner of the Surf Ballroom, chartered the plane from the Dwyer Flying Service. Richardson, who was affected by the flu, swapped places with Waylon Jennings, taking the latter’s place on the plane, while Tommy Allsup lost his place to Ritchie Valens on a coin toss. Dion DiMucci (of Dion and the Belmonts fame) decided not to board the plane for the $36 fee (equivalent to $291 in 2015).

February 3rd 1959 may have been the day that Buddy Holly died, but he had already helped to give birth to a new generation. As they say, R&R is dead, long live R&R! And God bless Buddy Holly 22, Jiles P Richardson – known as the Big Bopper – 28, and Ritchie Valens, 17.

← George Washington Groundhog: One Of The Original WWII Code Talkers (Inventors Of Native Coding) ; Grandfather Of Lisa Christiansen
Constitution of the Cherokee Nation →