← How to Lose Weight Fast: A Proven 3-Step Plan That Works
Irish Town Builds Memorial to Thank Native Americans Who Helped During Famine → 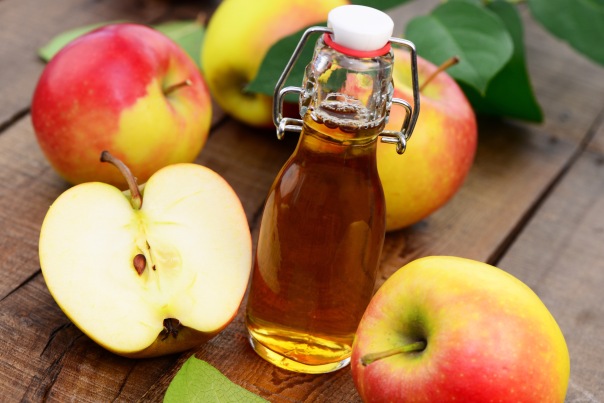 ﻿For centuries, vinegar has been used for various household and cooking purposes. It is also an ancient folk remedy, claimed to help with all sorts of health problems. The most popular vinegar in the natural health community is Apple Cider Vinegar. It is claimed to lead to all sorts of beneficial effects… some of which are supported by science. This includes weight loss, lower blood sugar levels and improved symptoms of diabetes.

Here are 6 health benefits of apple cider vinegar, that are supported by scientific research.

1. Apple Cider Vinegar is High in Acetic Acid, Which Has Potent Biological Effects
Vinegar is made in a two-step process, related to how alcohol is made.

The first step exposes crushed apples (or apple cider) to yeast, which ferment the sugars and turn them into alcohol.

In the second step, bacteria are added to the alcohol solution, which further ferment the alcohol and turn it into acetic acid… the main active compound in vinegar. 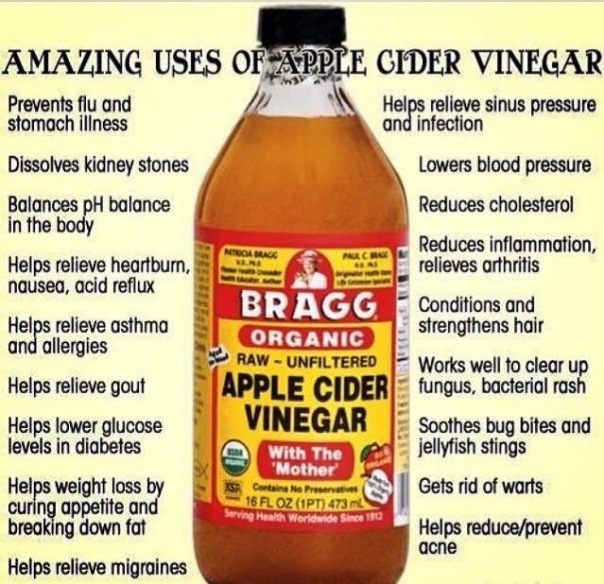 Some people believe that the “mother” is responsible for most of the health benefits, although there are currently no studies to support this.

Apple cider vinegar only contains about 3 calories per tablespoon, which is very low.

There are not many vitamins or minerals in it, but it does contain a tiny amount of potassium. Quality apple cider vinegar also contains some amino acids and antioxidants.

Bottom Line: Apple cider vinegar is made by fermenting the sugars from apples. This turns them into acetic acid, the active ingredient in vinegar.

2. Acetic Acid is a Potent Antimicrobial and Can Kill Some Types of Bacteria

It has traditionally been used for cleaning and disinfecting, treating nail fungus, lice, warts and ear infections.

However, many of these applications have currently not been confirmed by research.

Hippocrates, the father of modern medicine, used vinegar for wound cleaning over two thousand years ago.

Vinegar has been used as a food preservative, and studies show that it inhibits bacteria (like E. coli) from growing in the food and spoiling it.

If you’re looking for a natural way to preserve your food… then apple cider vinegar could be highly useful.

There have also been anecdotal reports of diluted apple cider vinegar helping with acne when applied on the skin, but I didn’t find any research to confirm this so take it with a grain of salt. 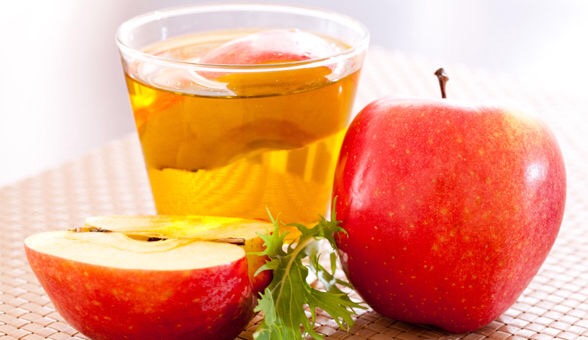 Bottom Line: The main substance in vinegar, acetic acid, can kill bacteria and/or prevent them from multiplying and reaching harmful levels. It has a history of use as a disinfectant and natural preservative.

3. Apple Cider Vinegar May Lower Blood Sugar Levels, Which is Very Useful For Diabetics
By far the most successful application of vinegar to date, is in patients with type 2 diabetes.

Type 2 diabetes is characterized by elevated blood sugars, either in the context of insulin resistance or an inability to produce insulin.

However, elevated blood sugar can also be a problem in people who don’t have diabetes… it is believed to be a major cause of ageing and various chronic diseases.

So, pretty much everyone should benefit from keeping their blood sugar levels stable.

The most effective (and healthiest) way to do that is to avoid refined carbs and sugar, but apple cider vinegar may also have a powerful effect.

Vinegar has been shown to have numerous benefits for insulin function and blood sugar levels:

Improves insulin sensitivity during a high-carb meal by 19-34% and significantly lowers blood glucose and insulin responses.
Reduces blood sugar by 34% when eating 50 grams of white bread.

2 tablespoons of apple cider vinegar before bedtime can reduce fasting blood sugars by 4%.

Numerous other studies, in both rats and humans, show that vinegar can increase insulin sensitivity and significantly lower blood sugar responses during meals.

For these reasons, vinegar can be useful for people with diabetes, pre-diabetes, or those who want to keep their blood sugar levels low to normal for other reasons.

If you’re currently taking blood sugar lowering medications, then check with your doctor before increasing your intake of apple cider vinegar.

4. There Are Some Studies Showing That Apple Cider Vinegar Can Help With Weight Loss

Given that vinegar lowers blood sugar and insulin levels, it makes sense that it could help you lose weight.

Several human studies suggest that vinegar can increase satiety, help you eat fewer calories and even lead to actual pounds lost on the scale.

Vinegar along with high-carb meals can increase feelings of fullness and make people eat 200-275 fewer calories for the rest of the day.

By reducing calorie intake, this should translate to reduced weight over time.

That being said, just adding/subtracting single foods or ingredients rarely has a noticeable effect on weight.

It’s the entire diet/lifestyle that counts… you need to combine several effective methods to see results.

Overall, it seems like apple cider vinegar may be useful as a weight loss aid, mainly by promoting satiety and lowering glucose and insulin levels.

But it won’t work any miracles on its own.
Bottom Line: Studies suggest that vinegar can increase feelings of fullness and help people eat fewer calories, which can lead to weight loss.

5. Apple Cider Vinegar May Have Some Benefits For Heart Health
Female Doctor Smiling With Thumbs Up

Cardiovascular disease (heart disease and stroke) is currently the world’s biggest cause of death.

It is known that several measurable biological factors are linked to either a decreased or increased risk of cardiovascular disease.

Several of these “risk factors” have been shown to be improved by vinegar consumption… but all of the studies were done in rats.

Apple cider vinegar may also contain the antioxidant chlorogenic acid, which has been shown to protect LDL cholesterol particles from becoming oxidized, a crucial step in the heart disease process.

There are also some studies showing that vinegar reduces blood pressure (a major risk factor) in rats.

Unfortunately, what works in animals doesn’t always work in humans.

The only human evidence is an observational study from Harvard showing that women who ate salad dressings with vinegar had a reduced risk of heart disease.

But this type of study can only show an association, it can not prove that the vinegar caused anything.

Bottom Line: Several animal studies have shown that vinegar can reduce blood triglycerides, cholesterol and blood pressure, but this needs to be confirmed in human studies.

6. Vinegar May be Protective Against Cancer

Cancer is a terrible disease, characterized by uncontrolled growth of cells.

There is a lot of hype online about the anti-cancer effects of apple cider vinegar.

Some studies have shown that vinegar can kill cancer cells and shrink tumors.

However, all of the studies on this were done in isolated cells in test tubes, or rats, which proves nothing about what happens in a living, breathing human.

Additionally, most of the studies were done on rice vinegar, not apple cider vinegar.

That being said, some observational studies (which don’t prove anything) have shown that vinegar ingestion is linked to decreased esophageal cancer in China, but increased bladder cancer in Serbia. 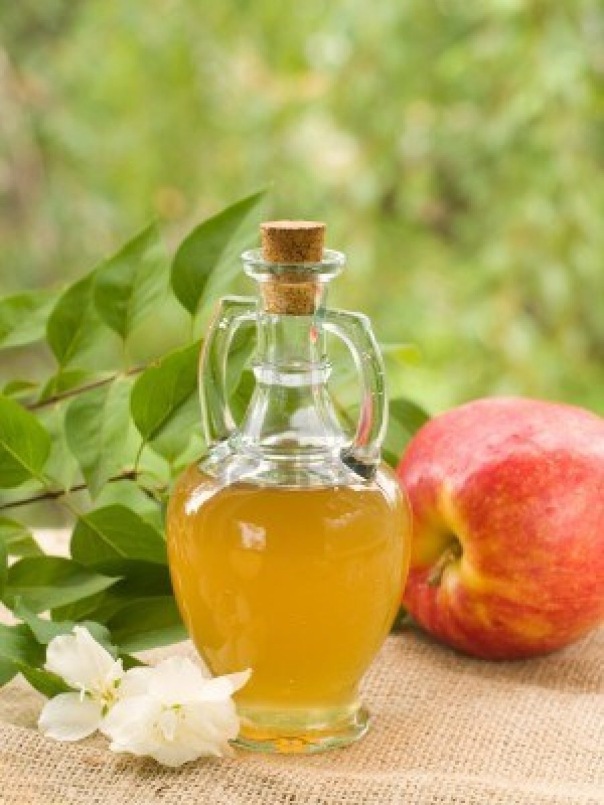 Overall… it is possible that apple cider vinegar may help to prevent cancer, but it is definitely premature to make any recommendations based on the current research.

Bottom Line: Some studies in test tubes and rats have shown that rice vinegar can slow the growth of cancer cells and shrink tumors.

Some people also like to dilute it in water and drink it as a beverage, I like to add it to my apple cider and I use 1 tablespoon because I have at least a couple of glasses a day. Common dosages range from 1-2 teaspoons (5-10 mL) to 1-2 tablespoons (15-30 mL) per day.

Definitely don’t go above that, because excess consumption may have harmful effects.

← How to Lose Weight Fast: A Proven 3-Step Plan That Works
Irish Town Builds Memorial to Thank Native Americans Who Helped During Famine →