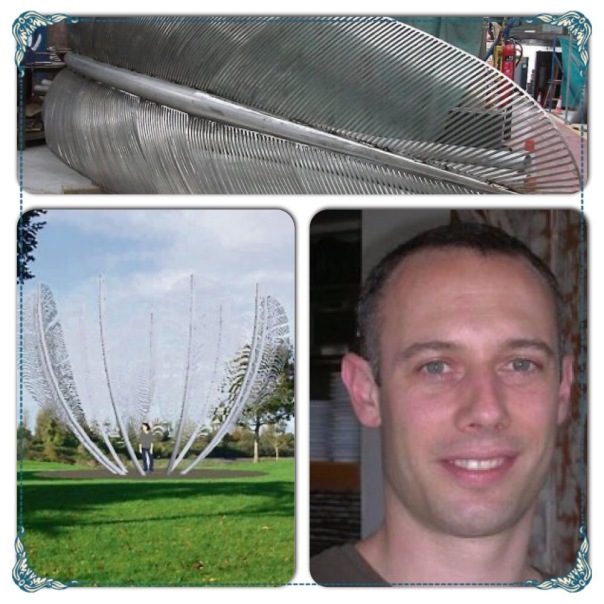 ﻿Empathy between two tribes who’ve known the worst suffering can unite them as brothers— even different races, across oceans. A sculpture is being erected in Ireland to thank a Native American tribe for sending what little money they could to the Irish people suffering from starvation at the height of the Great Famine more than 160 years ago.

On March 23, 1847 the Choctaw Native American tribe, who had known great hardship during their forced march to Oklahoma, collected whatever spare money they could and sent $170 to Ireland through a charity relief group.

To remember their generosity and friendship, a huge stainless steel sculpture of nine eagle feathers will be installed in Midleton, County Cork, on a grassy expanse in the town’s Bailic Park.

How Much Longer Can One Man Feed Millions? The Choctaw people donated the money 16 years after they, and other tribes, were forced from their homelands in Mississippi, Alabama and Florida and made to walk 500 miles along what is now known as The Trail of Tears. Many of the frailest perished due to disease, malnutrition and exposure during one of the coldest winters on record.

In today’s money, the $170 sacrificed by the Choctaw would be close to $4200. The Cork sculptor, Anex Penetek, talked about his $110,000 creation, “Kindred Spirits,” telling the Irish Examiner, “I wanted to show the courage, fragility and humanity that they displayed.” Choctaw leaders have been invited to the grand unveiling, which will be in a few months. 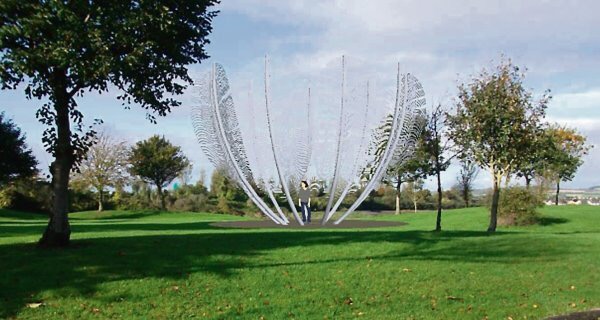 ﻿
Sharon O’ Reilly-Coates says a feather sculpture in Cork is a thank you to Native American Indians. FIRM, bronzed bodies above and below a loincloth. Long, silky black hair, colourful feathers, a tepee and perhaps a fishing spear? Enviable, shiny-haired girls.

Mention Choctaw Indians and that’s the image I have. I think of chocolate, also, but only because it sounds like Choctaw. Because of one noble act of kindness, the Native American Choctaws will be forever etched in Irish minds.

When these gentle folk were at their most downtrodden, they raised $710 and sent it across the Atlantic to Ireland, to ease our famine woes. It’s one Corkman’s job to make sure the Irish people never forget this extraordinary gift.

Sculptor Alex Pentek is finishing ‘Kindred Spirits’, a giant, stainless steel sculpture in praise of the Choctaw people. “I wanted to show the courage, fragility and humanity that they displayed in my work,” Pentek says.

When the nine eagle feathers are installed in Bailic Park, in Midleton, in Co Cork, they will command people’s attention.
﻿

Pentek hopes the Choctaw chiefs will come and see the spectacle for themselves, when it’s unveiled in a few months.

That invitation has been sent by Joe McCarthy, East Cork’s municipal district officer. He was also part of the team that decided the Choctaw gift needed to be marked by a €100,000 sculpture.

“These people were still recovering from their own injustice. They put their hands in their pockets and raised $1m in today’s money. They helped strangers. It’s rare to see such generosity. It had to be acknowledged.”

Just 13 years before the Famine, the Choctaws were forced by the American army, at gunpoint, to march across mountains and snow.

They were stripped of their land in Alabama, Mississippi and Florida, and had to walk 500 miles to Oklahoma.

“It was a slowly unfolding horror story. There was no food or shelter for them at stop points.” Over three years, 2,500 Choctaw people died from starvation and disease. The journey became known as the Trail of Tears.

“To see members of your family drop to the side of the road and to be powerless. To change that course of history. That stirred my imagination,” said Pentek.

Waving his big hands, Pentek, 41, from Grenagh, talks of curves, hand-welding, the maths of creating curved stems and the tapering of each feather to make it individual.

We’re standing in Cork’s Sculpture Factory, where the work is being built. It’s in a huge hall. “The sculpture, when finished, will reach the ceiling in here and the bowl of it will be the span across,” Pentek says.

That’s sizeable. It will certainly be memorable. I suspect that Pentek, a father-of-one, is not easily forgotten, either, especially when he eats out.

At the last cafe, he left behind a token origami rabbit, crafted from the serviette. “I just couldn’t help myself,” he joked.

Speaking of tokens, the Irish motorways are littered with Pentek’s sculptures.

Among them is a giant, bronzed violin on the Longford N5 bypass and an enormous rabbit on the N2, at Ashbourne, in County Meath. And there’s an eight-metre hedgehog on the N11 Gorey bypass.

So, a project of this scale did not faze him.

After all, he is one of the elite one per cent of artists who make a living in Ireland.

﻿
He greets me with generous palms and fine, knotty fingers on his sculptor’s hands.

He is tall, dressed in a classy, navy, structured jacket with crisp jeans and brown shoes. He smells of musk. One senses that image is important to him.

This fact, coupled with his attention to detail, even perfectionism, has kept Pentek working on public and private art projects since he left Cork’s Crawford College 19 years ago.

A plaque honouring the Choctaw gift was erected in Dublin’s Mansion House in 1992. It sums up the legacy of that gesture.

It reads: “Their humanity calls us to remember the millions of human beings throughout our world, today, who die of hunger and hunger-related diseases in a world of plenty.”

The Choctaw Indians way of life

2. Choctaw women are farmers. They also do the cooking and childcare.

3. Choctaw men hunt and fish and go to war if need be.

4. When a Choctaw boy wants to ask a Choctaw girl out, he throws a pebble at her feet and if she smiles, she likes him.

5. Corn, beans, squash and sunflower were the crops harvested by women.

6. Today there are two Choctaw tribes — in Oklahoma and Mississippi.

7. Each has its own government and runs like a small country.

8. Choctaws are now American citizens and are subject to American law.

10. The Choctaws were famous for their rivercane baskets and woodcarvings.